“All that a man hath will he give for his life.” – Job 2:4 (also the opening quote to this issue) 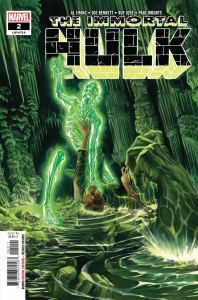 The Hulk has never been a hero I’ve properly engaged with. Too often it seems that his stories are more about how invincible he is and watching him beat people up rather than anything of substance. I figured this was a good time to try to engage with big green a little and see what more he had to offer, especially after reading the premise for the new ‘Immortal Hulk’ series. It turns out that originally it wasn’t anger that set the Hulk off, it was night time. Bringing this idea is bought back for the modern Hulk with an interesting twist – the Hulk comes back at night. Every night, even if Banner is dead (explaining how he recovered from a vibranium arrow to the face). This comic is bought to us by:

The tone of this comic isn’t what I would have expected from a Hulk storyline. We’re presented with an internal horror tale, of a man trying to survive the beast that will come out at night, leave a trail of destruction, leave him with nothing only to start again the next evening. Banner is a man running from the inevitable desperately trying to do some kind of good with the beast inside him, while trying to keep under the radar.

There’s a lot of internal monologue during the issue while we’re dealing with Banner and not big green. I really enjoyed this as it built the atmosphere, seeing his internal battle and getting to know the guy a lot better. Banner comes off as very human and as a man very much trying to do the right thing in very difficult circumstances. When the Hulk does rear his head he comes off as monstrous and scary more than anything else and this is something I very much enjoy. 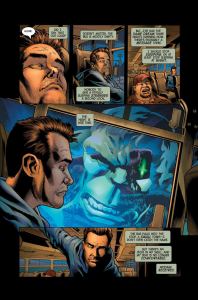 Art by Bennett, Jose and Mounts

By his very design the Hulk is meant to be monstrous though, however this side of him seems to be even more emphasized in the way Bennett, Jose and Mounts have done the art. His stance is consistently unnatural and beast like and his piercing eyes seem to leap out of the page (very good work by Mounts for that!). Hell, the villain of the issue spends much more time terrified of the Hulk than the Hulk is of it. Additionally with such a monologue-heavy issue, a high calibre of lettering was required. Petit and Lanham team up well to weave the reader’s eye through the pages and keep them engaged.

I’m glad to have picked this story up, I’m a fan of horror and it’s a great way to get to know a character I’m a little unfamiliar with still. The villain of the issue feels like a bit of a throw away, and the way the antagonist is shaping up could either result in a very interesting reflection of the Hulk, or feel a bit like an unnecessary inclusion for the sake of it. That’s the thing though, the real antagonistic force in all this is Banner’s lack of control over his life and struggle to cope with the Hulk, coming out every night like clockwork and even death cannot stop it.