Adam and Kii once again head to EGX to check out some upcoming video games!

One of the aspects of this year’s EGX that has really impressed us is the scale of the indie games section (though the AAA games section is admittedly much bigger, check out what I thought of a couple of those here). We really wanted to focus on the indie turnout, and ended up having so many games to choose from that we were never going to get them all! This is my second article from EGX2015 focussing on indies (first one is here!), this time looking at The Escapists: The Walking Dead, Tango Fiesta and Move or Die.

The Escapists: The Walking Dead (PC, Xbox One)

The Escapists, an 8-bit prison escape simulator, was an award winning indie hit earlier this year. Now Team 17 are combining it with the immensely popular The Walking Dead, coming out at the end of the month on Steam and Xbox One. Utilising the mechanics of the original game, The Escapists: TWD blends the time management and routine aspects with good old fashioned zombie survival, taking familiar faces from the comic book and TV series and challenging the player to escape the zombie hordes. Team 17 were showing off the tutorial and one of the five levels of the game in the EGX Rezzed area, and as a big fan of The Walking Dead I couldn’t exactly pass up a chance to give it a try!

After a funny little 8 bit reenactment of the stand off that puts Rick Grimes in a coma, the tutorial section of the game is the start of ‘Days Gone Bye’, where Rick wakes up alone in a deserted hospital. The game guides you through picking up items and crafting tools to progress through the level, before you get chased out by a large group of walkers. The top down view means it’s unlikely you’re going to get surprised by anything, but it was still pretty amusing knowing that the only way to go was straight into a room full of the undead. After escaping the hospital I tried my hand at the Herschel’s farm level, meeting up for head count with various TWD characters and trying to do chores and quests before arming everyone up to investigate the mysterious barn.

Unfortunately I ended up dying horribly, as I rescued a downed Tyresse and tried to fight off several zombies with a sicle. And Tyresse ran off after I helped him up! Regardless, this looks like it’s going to be a lot of fun, and fans of The Escapists and The Walking Dead should definitely check this out when it’s out on September 30th.

Another game we had a go at in the Rezzed section was Tango Fiesta from Spilt Milk Studios. This was a top down co-op shooter for up to 4 players, essentially a bullet ridden love letter to cheesy 80s action films where the players mow down wave after wave of enemy soldiers through randomly generated levels before blowing up objectives or killing a boss. As we were walking past the art style really caught our eye, and we ended up glued in front of it for quite some time!

I’m going to be honest, it took us a couple of practice runs for us to stop being utterly terrible at the game. Kii was controlling John Strong (basically John McClane) and I played as Conchita, as we gunned our way through several levels of militia before fighting a boss with some sort of history with Strong. The dialogue is hilariously macho, and the gameplay is simplistic but a lot of fun. There is a decent range of guns to pick from, with a few different call backs to various films (I didn’t try the ghost trap but can’t imagine what that would do to some junta thugs). The action is so chaotic that it can be difficult to keep an eye on your health, with bullets flying all over the place. Fortunately your team mates can pick you up when you’re downed, which is pretty much the only reason why we managed to take down a boss.

We ended up playing for about half an hour before dragging ourselves away to check out some more games. Tango Fiesta just came out on Steam this week, so give it a go on PC and Mac.

The last game we ended up playing on our second day was Move or Die from Those Awesome Guys in the Indie Mega Booth area. This is an insanely fast-paced competitive multiplayer game, with up to 4 players (local or online) battling it out in a series of intense mini games all with a different end game, the only constant being that if you stay still, you die. 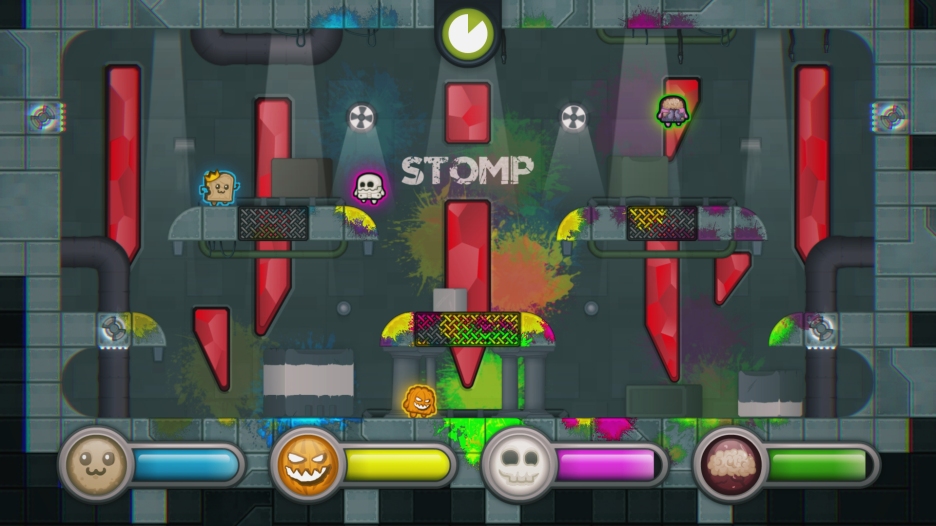 You pick your favourite skin and then the game randomly generates a list of minigames. There are loads of different game modes to enjoy, like stomping on each other, covering as many tiles as possible in your colour Splatoon-style, and pass the bomb. We ended up playing through several times. The first time Kii and I went up against one of the developers and a bot. The dev utterly destroyed us while we tried to get the hang of it, and we didn’t win a single round (it was still very fun though, and very quick). Luckily he didn’t gloat too much and he stepped back when two other guys turned up to try it out. Then it was a bit more of an even playing field. Move or Die is ridiculously fast-paced but very easy to pick up, and is a really great time. Check it out Steam Early Access.