“What’s worse? Dying? Or getting that close to death… and getting turned around… and dragged back into the world…” – Jennifer Walters

Issue #3 of Hulk caught my eye this week. Partially because Jennifer Walters was on the front cover and I’ve always found She-Hulk to be that little bit more engaging than The Hulk himself, and the simplicity of the title. Only Hulk, not Incredible, Unstoppable etc. With so many the Adjective Super hero comics out there one with such a simple name stands out. This comic was bought to us by:

We pick things up with Jen after the end of Civil War II. She had been knocked into a coma during the war, and her cousin Bruce’s death served as one of the key catalysts to the whole battle. I didn’t read Civil War II myself, so I was playing a little catch up here in learning the background to the comic. You don’t need to know too much of the detail though to understand the story telling approach taken by Tamaki. Jen is dealing with a hell of a lot. Work is both uninspiring and too much at the same time and she always looks tired, finding it hard to engage with her friends. In the mean-time crime is still taking place in New York, and conspiracies as always are developing.

The art is bright and simplistic throughout. I think this was done to create that artificial light feel anyone who’s working into the evening on a winter’s night in retail will know well. It slightly clashes with the mood of the comic, which in actually helps set the tone. Jen is pushing on and trying to get back to day to day life because she has to. She has to keep at it even when it’s the last thing she wants. Even so, this approach by Milla may not be for everyone. Leon did a great job in portraying Jen throughout the issue. His line work leaves her looking exhausted throughout and as if she cannot be bothered to deal with people.

However, even a Hulk has hands. How well are they drawn this issue? This is not a combat issue at all. There’s no action to speak of and character interactions are entirely social. Hands are well used to convey emotion throughout the issue, however Leon and Milla’s art style is light on detail. Although hands are drawn well there are not many knuckles in this issue. 8/10 for hand drawing skills!

I always enjoy a character exploration issue. It did take me a moment to catch up with things not having read Civil War II, however if this series continues along its initial set up we may be treated to a deeper engagement with Jen’s personality. I would like to see more Hulk myself too. For a series simply named Hulk, it was a little light on Hulk.

“Because I’m a large man? No, I never made donuts when I was fourteen. I sat at this table most nights and sold narcotics for a man named Pizzolo” – Wilson Fisk

The Kingpin has been a staple villain throughout my enjoyment of super heroes for my whole life. This started with him as the arch nemesis during Spiderman: The Animated Series, to the current Daredevil run on Netflix. During the modern Daredevil interpretation he’s presented as a surprisingly endearing and complex character, and seeing a new run focusing him in the comics this week I thought I’d pick it up and give it a try. This comic was bought to us by:

The story is from the perspective of Sarah Dewey, a reporter who’s found herself writing boxing profiles. She’s approached by Wesley (those who have seen the Netflix Daredevil will be immediately familiar with him), and finds herself offered a unique opportunity of writing the Kingpin’s biography. The focus of the first issue is Sarah’s conflict in deciding whether or not to take Fisk up on the offer. Unsurprisingly, there are parallels between the Netflix and comic incarnations of Fisk. He’s presented as intelligent, dangerous, a little awkward but surprisingly charming. 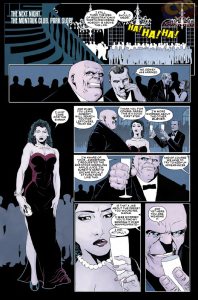 A very dark palette is adopted for the colours throughout the issue, changing briefly when we’re first introduced to Fisk. This really emphasises his status as main character to the series, despite the story not being from his perspective. Fisk himself is drawn in a very intimidating physique, with extremities supersized, combined with a cruel smile creating a slightly monstrous appearance. Individual panels are kept clear of clutter with no detail beyond the character themselves during many of the conversations. This helps keep the focus on the character development and plot which will lead the series.

The real question is, can Torres and Boyd draw hands? In an issue like this the focus will be on gesticulation and hands in casual poses much more than clenched fists. Fisk’s stand out as they’re the same size as most character’s heads. Where possible a fair amount of personality is communicated through each character’s gestures, with their mannerisms showing through. 9/10 for hand drawing skills!

“In here they call me ‘crazy’ Christopher Quin. But not so long ago I was known by another name… The Archetype” – The Archetype

Time to mix things up with an indie comic. I was recommended this one by a friend and thought it was well worth a look. Seeing as Whatever Happened to the Archetype? promised one of those alternate takes on the classic super hero story, looking at what may happen to them once they retire, I couldn’t help myself. This comic was bought to us by:

This story follows Christopher Quin, now living in a nursing home, looking back on his life from his alien home world, to being the world famous super hero the Archetype, to raising a family. It’s a spin on the classic Superman storyline, himself being the archetypal super hero, making the Archetype’s name that much more fitting. Things don’t play out exactly as they did on Krypton though. Quin grows up on his home world of Arcadia and has a close relationship with his Arcadian family and a very different set of events lead to him leaving his home world.

While the plot covers his transformation into the Archetype and many of his adventures, the focus is always his relationships with the other characters and how he copes with the pressures and expectations of being a hero. This is at play even more now as he’s simply dismissed as a crazy old man claiming to be the once iconic hero. Perrins also offers an insight we don’t often see in any super hero media – heroes who sometimes fail, innocent people die and that weighs on them.

Gravelle’s art has a very detailed style throughout the issue with a lot of effort put into expressions and backgrounds. While this lends itself well to the panels setting up a new scene or on large, zoomed out areas during an action scene it does at times distract from conversations and the characters having them. Gravelle’s art has a focus on characters’ facial expressions. This really shows the how they age throughout the issue and portrays real emotion during Quin’s opening narration, however, the most striking and powerful expressions during conversations between characters are often those with less detail to them.

However, all of the above does not address hands in particular. So, my favourite questions, can Gravelle draw hands? Absolutely, throughout the comic they’re drawn doing all manner of things, communicating body language, throwing punches and at a huge range of sizes from a child’s to a gigantic monster’s.

This is a fresh approach to a classic super hero tale. The overarching plot stands out, providing a narrative full of emotion, while dealing with themes often overlooked within the genre. There are two points which felt a little out of place for me though – while it felt very plausible Christopher’s tale would be dismissed as the ramblings of an old man, I couldn’t quite buy into the idea that the Archetype’s existence may be relegated to that of a myth. The other, while addressed later in the story, still stood out to me – I was surprised Quin didn’t wonder how people could read and speak his language right away. As for the art Gravelle’s is of a very high quality, although at times less would have been more.

You can check out Whatever Happened to the Archetype? digitally or in print from Insane Comics.

Stu Perrins will be at True Believers Comic Festival in Cheltenham on February 4th!