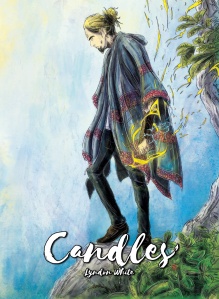 This week I’d like to highlight an exciting new comic due to come out later this month. Candles is a self-contained fantasy graphic novel both written and drawn by Lyndon White. For any of you who picked up a copy of the Little Heroes Comics Anthology #2 you’ll immediately recognise Lyndon’s unique colourful style where each panel is it’s own miniature work of art.

Lyndon’s previous work has covered a full spectrum of genres, available at www.lyndonwhite.com. Lyndon’s art is well suited to both the fantastical such as Candles, horror which he’s worked on extensively before, and bringing out an emotional intensity as seem on Little Heroes. Candles itself promises a fun fantastical adventure, with a simple premise of an overly enthusiastic child learning magic in a sceptical and fearful society which promises characters and their personalities to shine and drive the story.

Generation after generation people are taught one thing, never use magic. The evil Witch has cast a plague known as Dark-bark over the land and one by one, infected villagers are lured into the enchanted forest never to be seen again. As a last resort to save her family, Grace embarks on a quest to steal the Witch’s magic and use it to save her dying village.

Meanwhile, Idris, a flamboyant sorcerer and his talented apprentice Ava, are outcasted from their town and begin to track the source of the Dark-bark. Wolves howl at the night sky and candles begin to glow. The Witch must be stopped at all costs, however, everything is not as it seems. Candles is a full colour fantasy graphic novel, written and illustrated by Lyndon White.

The book is being crowdfunded through Unbound, launching during the Lakes Comic Art Festival and aiming to launch the campaign by the 11th October 2018.

Lyndon has recently finished work on the fantasy, horror mini-series Mandy the Monster Hunter: Legend of the Spindly Man with Hellbound Media, after launching a highly successful Kickstarter in March 2018, for his Call of Cthulhu concertina book.

Candles will be his third graphic novel after Sparks and the Fallen Star, 2016 and The Mind of James Svengal, 2018 (written by Jordan Sam Adams), both of which were published by Blue Fox Comics.

Got an indie comic for us to review? Email us at lostlighthouseindie@gmail.com!

Following my last review of the Little Heroes Charity Anthology Volume 1, I’ve been fortunate enough to be offered a review copy of Volume 2, which is currently on Kickstarter (link here)

Full disclosure, I’ll be backing this on Kickstarter myself!

To provide a brief reminder of what the Little Heroes Comics Charity is for, the publisher is raising funds by selling these issues. Little Heroes was started by Aaron Rackley to distribute comic-making kits to children following his own experience of cancer.

The second anthology is entitled ‘Family’ and was written by talented comic book creators who provided a wonderful range of stories that make up the anthology. This anthology was bought to us by:

As before the comics are a lot of fun. They are aimed at the children who may well be reading them from a hospital bed or while recovering from one treatment or another. They aim to inspire a feeling of togetherness and family. The stories are told usually from the perspective of a child or a parent in a variety of family situations. This includes families with the one parent or more strained relationships as well as the usual two parent set up. There are stories of adventure on grand scales, imaginary games, more simple challenges and it does get a little heavy in places (a very good thing!)

The art varies with each comic, providing a unique style to tell each story. This ranges from more cartoonish to heavily detailed. For me, the art of Lyndon White for ‘Mandy the Monster Hunter’ and Claire Spiller with ‘Tooth and Claw’ really stood out. Each of the artists though brought their stories to life and the work throughout is excellent.

Due to the huge number of artists I’ll have to forego my usual ‘can the artist draw hands’ question otherwise I’ll be writing this all night! Needless to say though, across the board they definitely can.

These comics are important, they provide an opportunity for children going through challenging times some much needed escapism through fun, heart-warming stories. I strongly encourage you to back this on Kickstarter or at least pick up a copy once it’s released.

Back it on Kickstarter here!

Got an indie comic for us to review? Email us at lostlighthouseindie@gmail.com!