Our pal Kit sometimes write for the site! This is one of those times.

First things first, I’ve updated the title of this series; it goes to show that a lack of proof reading will lead to poor wording! Also, there’s a fair chance I’ll occasionally chuck in the odd written short story if I feel one fits in with an article’s theme, though I’ll keep written books to no more than one per article.

As I mentioned in my last article, a few small spoilers will have snuck into this one too. They’ll be on the three stories I mention – The Wish of the Demon Achtromagk, Tom the Universe and The Sword in the Stone, along with a hinted spoiler for the anime/manga Death Note (so skip the next paragraph if you’d rather avoid this one).

With that out of the way on to the theme to this week’s article. We’ll be taking a look at perspectives. Each of these stories are from the perspective of something that isn’t exactly human. Perspective is a fun concept to play with so seeing a story from something else’s really turns a plot on its head. Another End to the Empire, a story I discussed in part one, shows what you can do by seeing the world from the villains’ point of view. I’d also point people in the direction of the Death Note that does the same thing, albeit in a far more serious tone. SPOILER: yes, Light is the bad guy… it doesn’t matter if you try to excuse his actions or not, he is the villain. Though, going by how many fans support him, it says a lot about how perspective and a strong charisma affect an audience’s opinion.

Which is why, as mentioned before, for this article I’m picking stories that take a look at the world from the eyes of non-humans instead of looking at the direct change in moral perspective so much. One of these – T.H White’s The Sword in the Stone is a book. There is a Disney adapted film, but it’s been so long since I’ve seen I won’t be taking into account in this article!

The Wish of the Demon Achtromagk

“The demon Achtromagk, Prince of the Endless Plains, and Duke of the Wastes of Tomorrow, opened a portal to our universe, freeing it to perform feasts of flesh and debauchery, to bask in fire and know heat, touch flesh and know pain, and bathe in blood and know lust – except for one, slight miscalculation…”

This is one of my all-time favourites. There are many stories out there where a human gets trapped in an otherworldly or alien body that makes little to no sense for them. You may come across the stories where the horror gets trapped in a human body instead. This takes things in a different direction entirely. The Cthulian horror Achtromagk is hell-bent on taking over our dimension and bathing it in the blood of the innocent, whilst he rules upon a pile of corpses just like you’d expect. His plans are just a little disrupted when he accidentally transfers himself into a body a hell of a lot smaller, weaker and cuddlier than he was expecting.

This is a much sweeter story than you may expect. Its fun to see something we’d usually fear so much be reduced to something so opposite to its nature, then struggle with the physical and emotional limitations that come with this change.

The perspective shift in this story is more there for the plot’s sake, and to have fun, rather than any deeper meaning. There is the idea that who we physically are has a large impact on our personality, and there is a bit of a nature vs nurture thing going on. Either way it’s a story I prefer to enjoy on a surface level, rather than for any deeper meaning! After all, if I was to do that to every story I’d be here all day, and would probably be considering doing this as legitimate study, rather than as a bit of fun.

A lot of this story’s horror, oddly enough, ends up being much more relatable and potentially real than that implied at the outset. Focusing the horror on just one little girl throughout from a threat that feels very real for many kids is effective. That being said, it shouldn’t ruin your enjoyment as an adult (I’m assuming you are one here!).

This story also won the Drabblecasts People’s Choice Award for 2011.

“I was a little confused during the Planck epoch (first 10^-43 seconds after the Big Bang), but sometime during the Grand Unification epoch (up to 10^-35 seconds), I figured out what had happened. By the end of the Inflationary epoch (10^-32 seconds), I’d analyzed the previous universe and simulated in my mind all that had ever happened that I cared to see.”

The idea of a normal person being elevated to God has been in many works of fiction. This story takes the idea and puts a scientific spin on it (pseudo-science of course, but this is fiction we’re talking about) and so we see the tale of Tom, the man who becomes his own universe. Not in an egotistical way, but quite literally accidentally becomes a universe. This story focuses on Tom’s relationship with his fiancé, along with a couple of different possible futures based on the story’s early events. If you knew everything that was going to happen without your intervention (on a cosmic scale here) what would you do?

Without too big a spoiler this story shows that there times when some things may be better left unknown, or at least moved on from. The context of the universe as a perspective is such a unique choice that it stays an interesting and novel idea throughout. The author manages to have fun with the writing, using the context to draw parallels with current scientific theories of the big bang, along with a little humour word choice. There are some serious points made about the nature of relationships, and the use of perspective in this plot provides an ‘all knowing’, if not quite all powerful, point of view playing around with the traditional third person omniscient narrator perspective.

Ultimately this story could be delved into a lot more than I have here and I’d be pleased if anyone could get back to me with their thoughts on it!

The Sword in the Stone 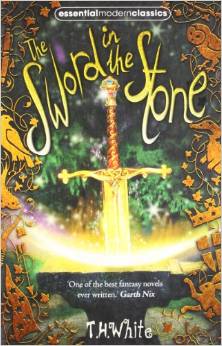 “EVERYTHING NOT FORBIDDEN IS COMPULSORY.”

Some spoilers here for the Sword in the Stone, The Once and Future King, and generally King Arthur!

Finally, The Sword in the Stone, written by T H White. Where to start with this one? This is the story of King Arthur as a boy, up until he draws the sword to become the rightful king of England (because clearly this is a fair a politically sound way to elect a ruler). This is also the first non-audio book I’ve mentioned, however it is both one that was very special to me growing up, and is a book with making huge points on perspectives and this is my article so I’ll do what I want with it! I’m sure people have written very long essays on this story before, however I’ll keep it to a couple of paragraphs!

In this story, Merlin teaches Arthur the ways of political ideologies. This is quite a lot to pack in, considering this is a book kids can easily read and enjoy! Arthur is transformed into various animals and sees things from their perspectives, each representing a political stance, and experiences that way of life. Each ideology is unsubtle and taken to the extreme, with communist ants, anarchist geese and so on. Arthur endures his time as each animal and then relates back to Merlin what he has learned. White doesn’t do much to hide his opinions of each ideology or his lack of fondness for some of them. Is this an issue, or can one go with it, even if they disagree?

Politics aside, this is a book a kid can read – the story itself is full of fantasy and fun. For those who deeply care about historical, or even mythological, accuracy, I warn you not to think too hard on the subject (there’s a cameo from another of Britain’s heroes that very much doesn’t tie in to the usual Arthur mythos!).

This book covers Arthur’s childhood and how he is shaped to become the King we all know. Check out the rest of The Once and Future King to see what happens! In places the book may seem a little silly or immature for adult reading. However, this is not a theme that carries on throughout the series. In each book of The Once and Future King Arthur grows older, along with the target audience of the book. This is up until the final book/epilogue, The Book of Merlin, where the plot takes place around a debate of the very politics Arthur learned as a child.

The language throughout the book can feel a little outdated, but this is a book written in the 1930s so that’s to be expected. The morality and ethics of the characters, even the “good” ones, aren’t what we’d expect by today’s standards. This is, however, a book set in the fifth or sixth century, so that does fit with the time.

There is of course the Disney adaptation, that honestly I may have seen once but don’t really recall. From what I’ve seen it’s a pretty accurate, if abridged, set of events so of course you should try it as well!

To stop myself waffling on much longer I’ll close things off here. This really is a wonderful little story and well worth reading, by itself or better yet as part of The Once and Future King. The good news here is the whole series is only 639 pages for five books. That’s a breeze compared to Game of Thrones or Harry Potter (both of which are, of course, excellent as well!). Give it a read, or if you’re feeling lazy check out the film!