I tried so hard to resist, I really did. I only managed to get a few hours into Dragon Age and even less into Destiny. I just don’t have the time to sit down and spend hours on open world games. What’s that? They say cunt in it?! *instantly downloads*.

I’ve decided to do a “first impressions” review of The Witcher Wild Hunt. Basically, what I’ve encountered during the first main mission.

The game opens with a very cool, animated sequence describing the events leading up to the games starting point.

We begin the game with a tutorial style sequence, and an erotically charged magical crab. You learn all the basics, and considering how much there is the learn in this game, that’s quite a lot!

After a few awesome, cinematic cut scenes you set off on your journey.

Without spoiling anything, your first proper contract is a Griffin. Fuck me, do Griffins look amazing. Don’t think you just have to find it and kill it. You have to, Rocky style, montage the fuck out of it! Leveling up by fighting wild dogs, bandits and Drowners. On a side note, drowners (fishmen) can snack a huge dick! They are creepy as fuck. And that’s compared to Wraiths! 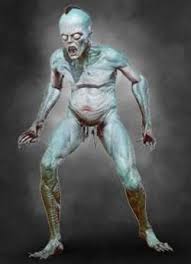 This Is A Drowner Billy. If He Had A Chance He’d Eat You And Everyone You Care About.

After learning some proper combat moves, you set trap and fight the Griffin.

I don’t want to talk anymore about the story itself. It’s good enough. I’m happy.

The combat system takes a little while to get use to but it’s nice. You are rewarded with great kills and punished by getting your head kicked in because you side-stepped when you should have rolled!

With all the things I love, there’s still things I hate about these style games:

1) Collecting ingredients, fuck me I’m not a fan of this. Though The Witchers system is not the worse I’ve played.

2) Weapons dulling! There’s enough to do in games like this and having to constantly go back to town to get my weapons sharpened is not something I want to use my time on.

3) Filling up your inventory.Ok, weapons I understand. Carrying 15 swords is a bit silly, but when it comes to ingredients, let us just have them, please.

1) Bombs! Yes, throwing bombs is fucking boss. I can’t get enough of it.

2) Having one sword for humans and one for supernatural beasties. Not anything special, just cool.

3) When you gallop with your horse, on a road, you don’t have to direct him. You can take you thumb off and he will stick to the path. This is genuinely awesome.

I can see The Witcher becoming a firm favourite, and I’m only 7 hours in. Did I mention all the free DLCs you can pick up? One’s about a rogue pig. Just saying.