Adam reads as many comics as he can afford. Every week he reviews of one of them, with potential minor spoilers.

This week I’m reviewing another horror themed comic in honour of the season, this time the original graphic novel Packs of the Low Country (on Kickstarter here). Packs of the Lowcountry is written by John Dudley, with pencils and inks by Don Cardenas, colours by Mark Dale and Kelly Fitzpatrick with colour flats assist from Drew Browne, and lettering from John Westhoff and Don Cardenas. 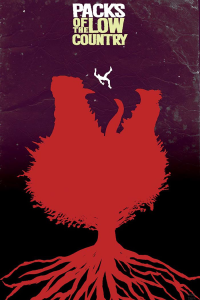 In a post apocalyptic world, humanity only retains some form of normalcy within walled fortifications. Those unfortunate enough to be  left outside have to try and survive packs of ‘invaders’, monsters of various forms that recently appeared, seemingly out of nowhere, and started killing humans wholesale. Bastion is a soldier dropped into the Lowcountry (South Carolina), following up on intel from Agent T regarding the Baker pack, a group of invaders that are essentially werewolves. But Bastion’s superiors haven’t told him the whole truth, and there are other invaders at play in the Lowcountry. He’s about to find out how the invasion started, who started it and make some pretty weird friends along the way.

Packs of the Lowcountry feels like a book very much inspired by 90s comics (and by extension, 80s action films), and as such is a lot of fun while being hugely over the top. Dudley’s characters are well rounded with just enough detail to make them fully realised, without bogging the story down with unnecessary exposition. The plot itself feels like a complete OGN, while the ending and world certainly leave things open for more stories in the world. 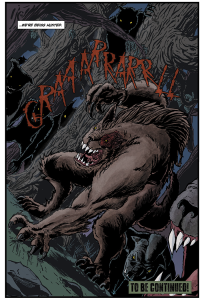 The art is expressive and kinetic, but the monster designs are the star of the show here. The wolves and ‘dragons’ are terrifying looking, while ‘The Connect’ has one of the more interesting designs I’ve seen in a long while. The bright colours splashed over the forest environs of the book rounds off the more retro feel of the comic.

Check out Packs of the Lowcountry. It’s a fun action-horror book that is well worth a read. Check out the Kickstarter here.