Over the next couple of weeks we’re going to be sharing our top 5s of 2015, from everyone who writes here at The Lost Lighthouse. This time Adam will go through his favourite 5 comics of the year.

I’m taking a quick break from the depths of writing my PhD thesis to write about some of the things I actually cared about this year. For my final top five I’m ranking my favourite comics released in 2015. Comics are one of the few things I still manage to put a lot of time (and money) into, making a trip to my LCS every Wednesday for new comic book day. I read a lot of really excellent series, with new ones starting all the time. This year I’ve experienced a real shift from DC to Marvel, trying out and sticking with many new series of the latter before and after Marvel’s summer event ‘Secret Wars’, while dropping a large number of DC books – I’m now down to about 5 monthly books from them. But as this list will reflect, I tend to read more Image books than anything else these days.

A warning now, there may be a few spoilers along the way. If you get to a title and aren’t necessarily up to date with it, read on only if you don’t mind finding out the odd plot detail. In particular for my number 2.

Justice League is one of the few DC titles I have consistently picked up since the start of DC’s New 52 back in 2011. Geoff Johns has been writing the book since issue #1, delivering the sort of blockbuster superhero action you’d expect from the title. The artist has changed every few arcs on the book, and since the end of last year Jason Fabok has taken over as the main artist. The previous arc ‘The Amazo Virus’ was decent, possibly one of the weaker plots of the last couple of years (certainly not due to the art). However, the current story ‘The Darkseid War’ has been superb, and more importantly has given Fabok the chance to really let loose with his art, not just with excellent superhero action but with huge god Vs god action between Darkseid and the Anti-Monitor. His action sequences are superb and relentless, while not falling down when it comes to facial work like many action-orientated artists do.

The story is moving in to its second act this week, with the various members of the Justice League converted to various New God status. A real positive for the series has been seeing the story through the eyes and narration of Wonder Woman, while she leads the remaining Leaguers in a desperate battle while gods wage war on Earth. Justice League makes my list because it is one of the series I look forward to most whenever it comes out, and always goes to the top of my reading stack.

The Fade Out started near the end of last year, and wraps up it’s 12 issue run next week. Created by long time collaborators Ed Brubaker and Sean Phillips, the series is a Hollywood crime noir set in the late 1940s. The Fade Out deals with the murder of Hollywood starlet Valeria Sommers, and follows writer Charlie Parish as he tries to piece together his fractured and drunken memory to figure out who is responsible for her death and why. It’s very different to what I would normally read, but I’m so glad I picked it up.

Brubaker creates an interesting noir mystery and it is clear that plenty of research and care has gone into making sure the era feels right for both the setting, story and dialogue. The same can be said for Phillips’s art, with the style and characters feeling very 1940s, so they all really standing out. A bonus to the whole package are the back up articles from Devin Faraci in every issue, dealing with a different star or theme of old Hollywood. It’s really fascinating stuff. I’ll really miss this series when it’s finished, and will be re-reading it all when the final issue is out to see what I missed. 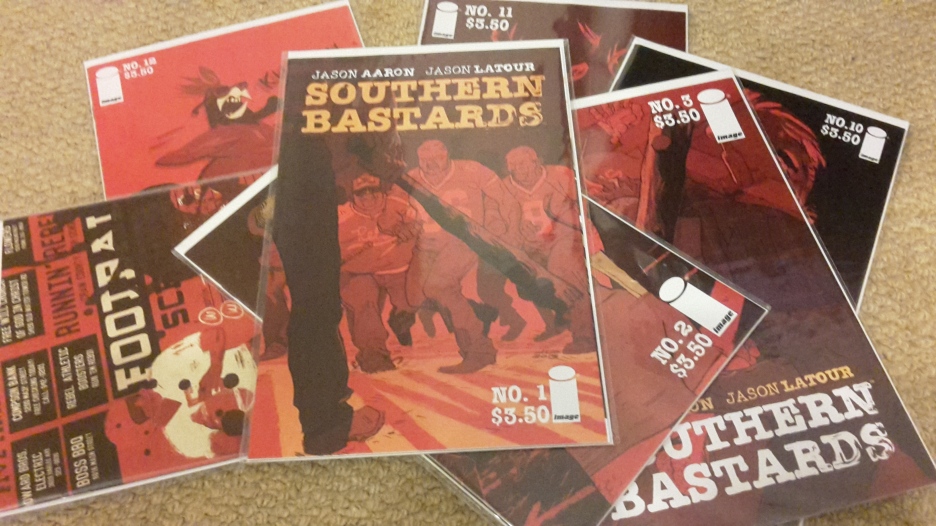 Another Image series that started back in 2014 that continues to go to the top of my reading stack whenever it comes out is the brutal Southern Bastards, written by Jason Aaron and drawn by Jason Latour. This is a fucking mean book. Set in Craw County, Alabama, Southern Bastards revolves around Coach Boss and his football team the Runnin’ Rebs, state champions that essentially run the town. The arc that has run through this year has largely focused on fleshing out Boss and his various violent cronies, presumably before we return to the plot moving forward in the new year.

Aaron’s writing is incredibly dark, I tend to feel fairly bummed out after each issue full of terrible people doing terrible things, but it is so well written and compelling. Latour’s art is brilliant, bringing this world to life and imbuing it with a dirty feel and colour palette. Everything in Craw County is ugly, and that includes the people. I can’t wait to see how low this series goes in 2016.

Another one from Jason Aaron, but this time decidedly less bleak. I jumped on to the Thor ongoing series during all the fuss over “Thor being turned into Lady Thor” and the huge amount of internet bullshit that followed that announcement that essentially boils down to people being afraid of change, of giving compelling stories a chance rather than knee jerk reactions and being unaware that if comic book companies only cater to the currently relatively small readership prices will continue to rise until the industry dies. And I don’t want that. I like comics. The storm in a teacup followed on from Thor as we know him, the Odinson, becoming unworthy to wield Mjolnir. In his place, a mysterious female picks up the hammer, and starts to use it more skillfully than even the Odinson. He spends a large amount of the first run leading up to Secret Wars trying to figure out her identity, which is revealed to be the cancer-stricken Jane Foster. And using the hammer is rendering her treatments ineffective, so being a hero is slowly killing her.

The story is tightly weaved and incredibly enjoyable, with really top notch plot and character work from Jason Aaron. Dauterman’s art is superb though, and probably the series’s main selling point for me at this stage. There are huge action splashes that are breathtaking to behold, and the cosmic and otherworldly elements and characters of the Nine Realms have looked great so far. When this series wrapped up for Secret Wars I was disappointed, but then delighted to hear that the same team was returning for the continuation after the summer event with The Mighty Thor. The issues so far from that I feel have been even better than the pre-Secret Wars material.

And calm down nerds. Eventually Odinson will be Thor again (in fact there is a fairly large hint in a Secret Wars tie in that we may be looking at having two Thors, which makes me happy as Jane Foster as Thor is great), Steve Rogers will be Cap again (it is his 75th Anniversary in 2016…) and I don’t really know or care what is happening with the Hulk. Just enjoy the stories. Or piss off. Either way do it quietly so the rest of us can read our comics in peace.

Big Image bias in this list isn’t there? My favourite series of the year is the extremely high concept sci fi Black Science, written by Rick Remender and beautifully drawn by Matteo Scalera. Starting back in late 2013, Black Science focuses on a group of alternative scientists pushing the boundaries of conventional research, led by Grant McKay, formerly of the Anarchist Order of Scientists. Their project, ‘The Pillar’, breaches into different dimensions, but someone sabotages it. It’s stuck jumping across different worlds – dragging everyone that was present along with it, including the other scientists and Grant’s kids Pia and Nate.

The story has jackknifed through gorgeous worlds, deadly worlds, diseased worlds and the slowly dwindling cast of characters has had to interact with multiple versions of themselves in various realities. And while that is all pretty high concept and mind-bending, the latest arc ‘Godworld’ is utterly insane. Remender’s writing is complex and layered, with excellent and dark character work and intelligent science fiction that commands your attention. Scalera’s artwork renders Black Science as one of the most consistently superb looking books on the stands every month. The worlds he brings to life are just stunning.

The latest part of Godworld is due out next week with issue #19, and I’ll probably read it on the tube on the way home. And it will probably be weird, and anyone sitting next to me will be deeply confused and terrified. And I don’t care.