Here are Adam’s five favourite films of the year.

We’ve been a little behind on content over the last few months, due to every one of us being busy as hell, but I didn’t want to see the end of the year without sitting down and figuring out which were my favourite films of this year. I think I’ve been the the cinema more times in 2016 than any other year in recent memory, and have seen more non-genre films too. Reflecting back, there were a lot of good films, a lot of not so good films, a few very bad films (looking at you BvS) and not that many that I would call ‘great’. As such, I struggled with the 4th and 5th choices between a few films that I enjoyed, but didn’t quite hit the mark. I thought Fantastic Beasts, High Rise, The Hateful Eight and Ghostbusters were all a lot of fun (well, The Hateful Eight was maybe not ‘fun’), along with a few other highlights like Arrival and Suicide Squad (just kidding, that was also hot and messy garbage), but ultimately my list boils down to the following. Beware some spoilers:

The third entry into the ‘Kelvin’ timeline of the Star Trek movie reboot was also the first not helmed by J.J.Abrams. Beyond was largely free of the winks and nods that were necessary in the first, but possibly weighed down the sequel Into Darkness, and embraced at least to a degree the whole ‘five-year mission’ aspect to Star Trek. As a result, there was a real feeling of adventure in this installment. In addition, the cast at this point are all working so well together that their interactions are a real joy to watch, especially Karl Urban and Zachary Quinto as Bones and Spock. New character Jaylah was a stand out, I hope we see her in the next film, and the Federation station Yorktown was stunning. The bad? The enemies weren’t brilliantly fleshed out, the Beastie Boys finale was a little too cheesy, and no satisfactory explanation was given for why there was a motorbike on an alien planet. But a fun sci-fi adventure film all the same.

The long gestating passion project from Ryan Reynolds and company that no one seemed to have any faith in comes in at number four for me, while I think a lot of comic book film fans would probably put it a little higher. This was undoubtedly one of the funniest films this year, with a surprising hit rate of gags (although they come so thick and fast that any misses are immediately forgotten in laughing at the next joke). Considering the budget Fox gave it, the film looked great too, though I think most of the budget went on the highway scene. The plot was serviceable, in a sort of early-X-Men film sort of way, but the charm of the film’s cast and the strength of the humour allowed it to shine. The same can’t be said for Fox’s other mutant offering of 2016, X-Men Apocalypse, which somehow managed to resemble the first two entries in the franchise without any of the heart. Still, Deadpool was a definite success. Here’s hoping that the sequel manages the same.

Doctor Strange was the second Marvel Studios of the year and the first origin film they have put out in a while, which was something that they got a fair amount of criticism for, largely unfounded in my opinion. They largely seemed to revolve around similarities to the first Iron Man movie, an 8-year-old film, and complaints about basic three act structure that 90% of movies adhere to. Sure, with the subject matter they could have taken a few more risks, but injecting magic properly into the MCU was something that the movie going public may have struggled to swallow, and plenty of other risks right down to the method of conflict resolution made this an interesting watch and one of the three films I considered to be great this year.

I think Doctor Strange was the apex of internet analysis on every little bit of casting for one of these films, and everything has already been said over the controversy of casting Tilda Swinton as the Ancient One, or people upset that their ideal choice for Stephen Strange wasn’t picked. Everyone in this piece was great (yes, yes, great article about how the Marvel villains are underdeveloped. How original, every site ever), Cumberbatch played the arrogant surgeon brilliantly, and I could watch a whole film of just him and Chiwetel Ejiofor just having a chat. The real star of the show though was just how gorgeous the film was, with almost every instance of mind-bending magic and reality shifting looking superb.

2. Rogue One: A Star Wars Story 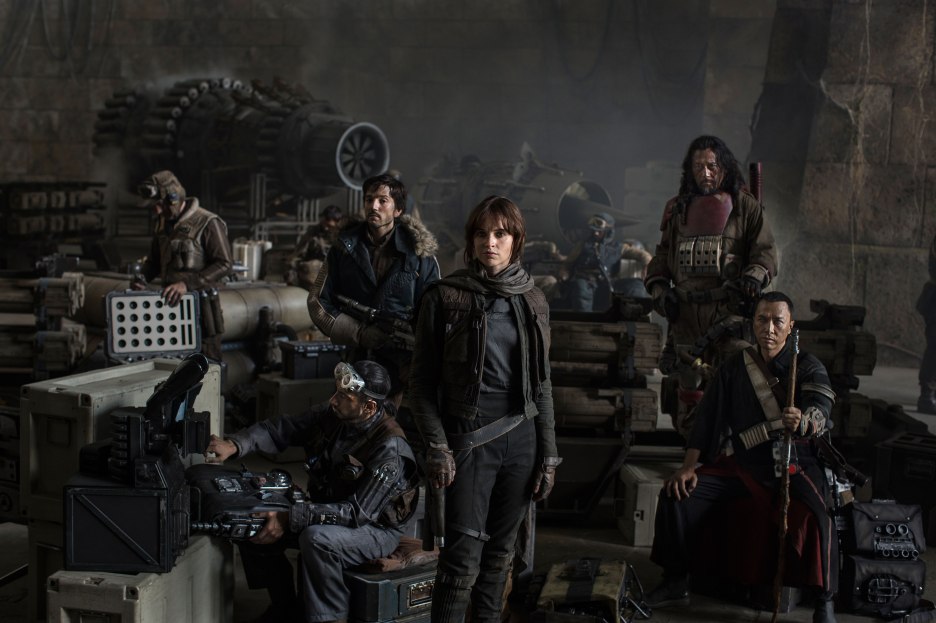 I’m writing this having just got in from my second viewing of Rogue One, and I’m pretty happy with my placing it at number two. Rogue One has proven that reports of reshoots don’t always spell disaster, and that at least so far, there isn’t an oversaturation of Star Wars. If we get a tonally different Star Wars Story every other year in between the main story, I think I can handle that if they are going to be this good.

In Rogue One we got a proper war story, showing the struggles of the rebellion and that victory isn’t always easy, clean or pleasant. It humanises the Rebel Alliance, especially without the Skywalker clan or the inclusion of any Jedi or lightsabers. The cameos bordered on a little gratuitous at points, with whole scenes including a computer generated version of a long-dead actor. I really enjoyed the nods to Star Wars Rebels though, and the plugging of a decades long literal plot hole was also welcome, if a little convenient. All the new characters were strong, with Felicity Jones as Jyn Erso, Donnie Yen as Chirrut Imwe and Alan Tudyk as K-2SO being the standouts for me. The gorgeous vistas of Scarif and Lah’mu also gave a nice break from the usual desert environs of the Star Wars Universe, even if Jedha didn’t.

If Rogue One was concerned with going back and filling in its universe’s continuity, Civil War was the culmination of years of storylines and was all about moving forward, even more so than the last Avengers film Age of Ultron. For me, the third Captain America film delivered on pretty much every promise it laid out for itself. With a huge cast it was in danger of being overly full, and was jokingly referred to as ‘Avengers 2.5’ by many on the lead in, but this was a Captain America film through and through. The climax of the thread started in The Winter Soldier, Civil War managed to juggle the personal plot of Cap and his best friend, drawing in the whole Avengers gang in the process as they were told that in the wake of saving the world several times with surprisingly modest body counts, that the whole world wanted them to answer to governments with agendas. Disagreements start, friends start punching each other. People get incarcerated in hilariously complicated prisons.

What worked was the lack of a world ending threat, which will make the impact of Infinity War felt that much more. These people have been playing these characters for so long now that they have them down completely, but I think this is the best performance Robert Downey Jr. has put in as Tony Stark. And by circumventing a few potential origin stories in favour of injecting some new characters straight into this film, we got the brilliance that was Chadwick Boseman and Tom Holland as Black Panther and Spider-Man respectively. Marvel may still need to pull the trigger on the death of an Avenger to make a threat seem real, but Civil War shifted the MCU into a very interesting place in the lead up to Infinity War and the proper introduction of Thanos. We may have to wait until 2018 for that, but I would be surprised if we didn’t see some hint of what is to come in one of the three Marvel Studios films out next year.

And that is it! What were your favourite films of the year? What did you think of any of the above films? Let us know in the comments!