“And the road of the mighty necroworld shakes the heavens. But not loud enough to drown out the laughter of one little worm” – Narrator

This week I wasn’t sure what I’d review, until I enjoyed Thor #5 so much I couldn’t help but take the chance to write about it. I’ve really enjoyed the return of the Odinson to the mantle of Thor (as I did the fantastic Jane Foster Thor run before) and the cosmic level adventure to date has provided an incredibly fun change of pace and has bought some of the most powerful Marvel entities such as the Great Galactus, Ego the Living Planet and a mysterious cosmic worm into the picture.

This coming was bought to us by:

Thor #5 takes place in the distant future, in a dying universe where the All-Father Old Man Thor and his grand daughters protect New Midgard. The issue picks up with Thor coming face to face with an old friend – (very!) Old Man Wolverine, the current incarnation of the Phoenix Force. We’re treated to a flash back to show the dynamic between the two in the modern era, with them both enjoying a few drinks in ‘the best bar in Midgard’. We see that although there is still a friendship between the two in the future there are far greater forces at play here they are both bound by. In the meantime, the majority of the universe has deteriorated and passed away, leaving only the most powerful forces standing. New Midgard has caught their attention and the grand daughters of Thor must protect it. 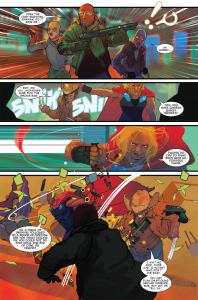 Ward excels in an art style well suited to such a fantastical issue and cosmic scale events. His characters and actions scenes almost appear to be painted brushwork, with intense colours communicating motion, action and awesome imagery that captures the imagination. Sabino’s lettering adds to the grand atmosphere. His choice of speech bubble, font and text colour for various characters suits them perfectly and brings out their personality – the passion of Thor or the malevolence of Ego the Living Planet. Sabino does a solid job with the lettering tucking them into tight panels weaving the reader’s eye through the pages and allowing the reader to appreciate the art.

I really enjoyed this issue. This is a hell of a good way to write Thor, cosmic battles for the fate of the Marvel universe against cosmic level entities. It’s fun to see Aaron’s interpretation of a few familiar faces come the end of time, to see who from the current era is still kicking around and what has happened to certain characters and powers that make a cameo appearance and set up a cliff hanger for the next issue.

I’ve been enjoying Thor for a while, and that won’t be stopping any time soon!