“Did I mention I am only able to walk again because of a chip in my spine that connects directly to my brain?” – Batgirl

Batgirl was one of the first series that got me into the DC ‘New 52’, back when Gail Simone was writing it and had her outstanding run on the character. This week it felt right to revisit Babs to see how she’ll be fairing under Mairghread Scott’s storytelling. I’ve always found Batgirl’s relationship to the Bat family interesting, sort of sitting within it but also outside of the key Batman and Robin(s) relationships. Set up fighting crime in Burnside we pick up with Barbara in a new arc against one of her recurring villains – Grotesque. 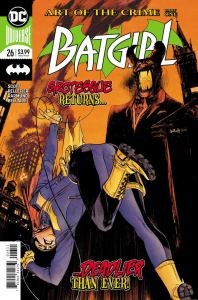 This comic is bought to us by:

We pick up Batgirl chasing down Grotesque through the streets of Burnside. The villain Grotesque has been living up to his name with a series of horrific murders imitating modern art. It’s a simple yet effective opening which gives some of us who have been a little out of the loop to get to know Batgirl again via her internal monologue as well as Grotesque by his, well, horrific murder spree. It’s a little refreshing in a way to pick up a vigilante superhero being an actual vigilante and dealing with more day-to-day crimes as opposed to something that appears to be a world-ending threat. The story follows Batgirl’s pursuit of Grotesque and plays on some defining traits of her as a character, reaching back to her time as Oracle to revive some of her unique challenges that can be put to one side (such as her dependence on technology to walk). Additionally we get to see Barbara Gordon as Barbara Gordon, building on one of her defining relationships, with her father. 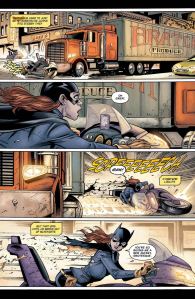 The last time I read a Batgirl comic it was after Simone’s run and Larson took over, with Albuquerque leading on art. At this time a younger, more cartoon-like aesthetic took over from the grittier more Batman-like imagery of the Simone era. To me, Pelletier’s work felt like a well woven blend of the two styles. Batgirl in her more modern outfit, fighting crime in a realistic context with what feels like less of a gritty pallet from the series I was most familiar with. Pelletier’s pencilling combines well with Bellaire’s colouring and Rapmund’s inking to achieve this affect. I also like how the civilian scenes look, with Barbara out of costume she appears friendly and warm as a person whilst coming off as well in control of herself and the situations she is in.

There’s something I enjoyed about this issue I didn’t spot until my second read. Batgirl is determined and focused on fighting crime. Finding a hero these days who isn’t racked by thoughts of a relationship, villain messing with their mind or existential crisis is quite refreshing.