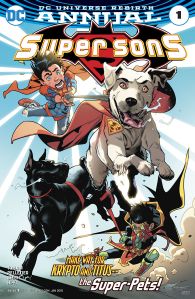 I tend not to pick up comic annuals when they come out, but this week I was stuck for something to review, this week being a 5th week. Then I saw a cover with Krypto the Super Dog and Titus the Bat Hound on it. I had to go straight for it because both these characters are amazing. I would highly recommend the post-Rebirth arc of Superman, which features Krypto kicking ass. As for Titus the Bat Hound, while I’m less familiar with him the cover frames this issue as the interaction between Krypto and Titus in the way we’d usually see Batman and Superman (World’s Finest) or more recently Damien and Jonathan the Super Sons (of course, why its presented as a special for that series.

This comic was bought to us by:

While we do get a fun sequence with Robin and Super Boy preventing a bank robbery, the main focus is their interaction and the way they bounce off each other. Both children presenting slightly exaggerated personalities of their fathers. What they haven’t had a chance to deal with yet though, is the series of dog-nappings taking place throughout Gotham City. Much as the boys need to rest Kypto is having none of it and flies off to bring in support. Not only are we treated to Titus the Bat Hound joining in, we also get treated to Bat Cow, Flexi the Plastic Bird and Streaky the Super Cat. As I’m sure you will have guessed, this isn’t the most serious of stories, but its bright, colourful and a hell of a lot of fun. Once Kypto takes over the story we’re getting by mostly on animal noises for dialogue, not that this takes away from the plot or the character interactions. It transpires that after the loss of Clay Critter (seemingly at the paws of the feline Red Lantern Dex-Starr) the Super-Pets were forced to disband and before they can solve the mystery of the stolen pets they need to rebuild broken bridges and bring the team back together.

With an issue less heavy on dialogue Pelletier, Smith and Hi-Fi had to be on their game with the art. Hi-Fi provides fun and vibrant colours, reminiscent of the sort of thing I remember from Saturday morning cartoons. The detail provided by Pelletier and Smith provides a huge amount of characterisation and expression for our non-human protagonists. Emotions are communicated as they try to resolve their differences and their roles in their team nice and clear.

The question is though, how well do the art team draw hands? While hands feature in the story they only do for a very limited number of pages with very few characters with any. I can’t fault the ones that are there, but only giving a 7.5/10 due to the limited number. Maybe an 8.5/10 if we count chimp hands. Unlike most comics though, it’s only fair to ask if the art team can draw paws for this one! (and hooves and bird feet…) They certainly can. Presenting us with a wide range of animals whatever appendages they possess are drawn well and look great both in and out of action. 10/10 for various animal appendage drawing skills.

This is the sort of comic that helps brighten a week. It isn’t a serious story or anything revolutionary, but it’s fun and accessible and if you need something light hearted and you like your animal as well as super heroes it’s well worth a look.

Score: 9 Terrifying Bat Hounds out of 10