Ian likes books. Here is what he thought of one of them.

Odin, who is third, who is wanderer, who sacrificed himself to himself for knowledge and power. Loki, whose misdeeds range from mischievous to murderous. Thor, the strongest of the gods but, it’s fair to say, not the smartest. These are the central trio of Gaiman’s Norse Mythology. Surrounding them a supporting cast of gods and giants and monsters. Always present in the background is Ragnarok, the death of the gods- is it yet to come? 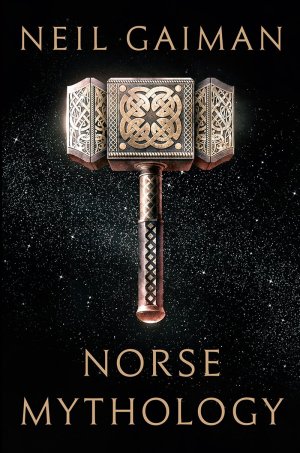 Norse Mythology is a collection of retold Norse myths- Gaiman has worked primarily from centuries old source material rather than rehashing popular versions of the modern era. The prose is sparse, more reminiscent of children’s books of myth and legend than the rich descriptive world-building Gaiman is known for. These are stories- what is told is only what is necessary. Every detail highlights character or propels plot. These gods are not benevolent omniscients- they are human in their wants and desires and virtues and flaws. Capricious and prideful, they barrel through a world that is painted in broad brush strokes. Minor details hint at the endless further stories beyond this collection- what we see is that polished gleam of ice that sits above the surface.

Loki’s children and Freya’s wedding are the stand out tales. Almost every story in the collection could stand alone, but together they form an arc from the beginning of time to Ragnarok, the death of the gods. The Norse universal creation myth is strikingly bizarre in its details, and it is testament to the skillful writing that some of the more absurd aspects never overshadow the underlying feeling of genesis and timeless truth. The ambiguity of description allows the reader to fill in the blanks- we know Loki is handsome, but little else. We know Valhalla and Valkyries, but we do not dwell overlong on specifics.

A gorgeous aspect of these stories is the lack of clear moral lessons. Sometimes the good are rewarded and the evil punished, but just as often the opposite is true- few are the unimpeachable in this world. So often the problems that pursue the gods are of their own devising- and who can judge the gods themselves? A highlight is the tale of Fenris-wolf, so ambiguous a character. Can you truly blame him for his actions?

Marvel have been digging into the seams of Norse Mythology for decades now, and the modern iteration of Loki is arguably one of the most popular characters in their cinematic universe. Reading these myths, it is surprising to see which aspects of character and story have been kept and which have been twisted in this transformation from fireside tale to movie- certainly differences abound (specifically Marvel’s Odin pales in comparison to the All-Father of myth), but there is a comfortable recognition. These are characters and archetypes we know well, and the familiar cadence of myth is a balm. Indeed some of the more boisterous tales are reminiscent of comics in their form- I await the inevitable graphic adaptation of these tales eagerly.

I highly recommend it.

You can pick the book up below!