“It’s not MY fault, I’m stranded on Earth with your STUPID drinking rules!.” – Star-Lord

With the trailers for Guardians of the Galaxy 2 both out and a huge success I thought I’d pick up with Peter Quill in the main comics this week. Marvel are starting a new solo run with this Guardian of the Galaxy, bought to us by:

We pick things up after the events of Civil War 2. It’s not something you need to know the background on fortunately, we do find out early on though that the Guardian’s ship has been wrecked and Peter is stranded on Earth. Which he’s spending his time doing exactly what I plan to on Christmas Day – drinking far too much before lunch. He tries to make the best of things while he’s stuck on Earth by reconnecting with friends and getting out for a bit.

The scope of the comic is small, Star-Lord isn’t adventuring around the universe saving everyone but trying to cope with being bought down to Earth, literally. It doesn’t help that he is not the most popular vigilante amongst Marvel heroes. I wasn’t familiar with Zdarsky or Anka’s work before this comic, however their take on our hero trying to deal with day to day life is a great way to introduce new readers. We’re also treated to a couple of cameos which lighten the overall sombre mood of the comic. 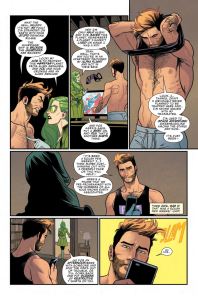 The art at first appears simple but effective, but manages to match the fluctuating mood throughout the comic – light and fun to sombre and tense. The colouring feels very clean as well, Wilson and Anka teaming up to deliver a sense of texture and detail to the panels. Petit keeps the lettering minimalist to allow for broad and colourful scenes throughout the issue. Star-Lord also spends a fair bit of time shirtless if that’s your thing. However, although Anka and Wilson are great with chests, how are they with hands?

Can Anka draw hands? Being critical there are a couple of instances where the hands aren’t quite up to the rest of the art. That isn’t to say they’re bad as such, but simply aren’t quite as good as the rest of the art throughout the issue – one passer by caught in a cross fire and in a guest appearance by Wolverine his claws appearing to come out of his fingers Lady Deathstrike style, 7/10 for hand drawing skills!

I really dug this as a start to a new series. Focusing on the small stuff and giving us a character in a more relatable environment helps make them more human and gives a surprising weight to the situation when things do go to hell. The writing and art team have also got off to a promising start and I’m looking forward to the rest of the work they can deliver.