“From that night forward I was Batman” – Terry

Me again, up for another comic book review, and with DC still enjoying the success of their Rebirth relaunch I’ve picked up another first issue to review. This time it’s Batman Beyond: Rebirth, written by Dan Jurgens, art by Ryan Sook, colours from Jeremy Lawson and Tony Aviña and letters from Travis Lanham. I picked Batman Beyond as like many people I watched the cartoons when I was younger. Despite this I hadn’t picked up a copy of the comic books before now. 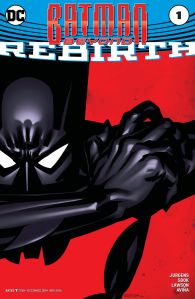 As with the cartoon the comics are set in Neo-Gotham, the future of the DC Universe. The fluorescent lights illuminate the city, technology has moved on leaps and bounds, but Gotham is still Gotham, crime is of course rampant. The Batman you ask? Well as you’d imagine Bruce is a little long in the tooth for crime fighting, so Terry McGinnis has taken up the cowl.

This first issue is largely an introductory one we get to know Terry and an overview of his back story in becoming the current Batman and his relationship with Bruce. I’ve always been a fan of the way Batman Beyond portrays Bruce as even more jaded and cynical than you could even normally picture the Bat.

We also get introduced to the key supporting players – Commissioner Gordon (Barbara), Terry’s brother Matt and his closest friends. Unlike Bruce and the other traditional Bats such as Dick Grayson, Terry still has a few of his family alive and a close relationship with them.  This gives a whole new spin on the regular Batman persona. 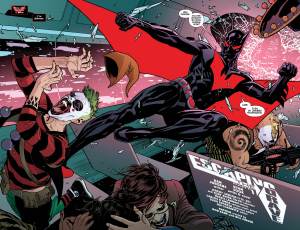 Sook’s art is vibrant and colourful, he is certainly a fan of mixing up the panel layout as well, which creates an action packed, dynamic feel to the comic to support the action. The lettering is well crafted to skilfully lead the read across the page and draw attention to what really matters.

However, though lettering and panels do matter a lot, can Sook draw hands? This is an action-packed issue, as you’d imagine this means character’s hands are rarely still. There’s a lot of punching, grabbing and holding going on. While there is some conversation to the issue hands are often out of shot. They are used well for expression a couple of times, but while I’d have liked to have seen them used this way a little more this probably isn’t the issue to do so with all of the action going on. 8/10 for hand drawing skills!

My main criticism of this issue is that I saw the last page twist coming a little too early I feel. For a kick off issue it’s a good start, we get to know Terry, who is well developed, and while the enemy isn’t anything too exotic the familiarity of the Jokerz eases the reader into the series.