I had a few different books to choose between for this week’s review, but ultimately Superman #6 stood out far above the rest. Issue 6 is the final part (aside from the epilogue) of the ‘Son of Superman’ arc, written by Peter J. Tomasi and Patrick Gleason, with Gleason on pencils, Mick Gray on inks, colours by John Kalisz and letters from Rob Leigh.

The Eradicator has followed Superman, Lois and their son Jon to the moon on his deadly mission to purge the human impurity from Jon and preserve the legacy of Krypton. After destroying Batman’s moonbase over the course of their battle (because of course Batman has a moonbase), Superman finally gains the upper hand with a little help from the souls of the dead from his home planet. But is it enough to defeat the Eradicator, protect his family and gain the trust of his new world?

This creative team has been working together for a while now, and everything I’ve read from them has been of an incredibly high standard, with Batman and Robin #18 back in 2013 from Tomasi, Gleason, Gray and Kalisz being as close to a perfect comic book as I have ever read. Since Rebirth, their take on the Man of Steel and his family has been one of my favourite titles and this issue was a fantastic climax to the Son of Superman story. Putting aside the slightly confusing history of this Superman (with his family the survivors of the pre-Flashpoint universe, now taking the mantle of Superman after the New 52 Superman died. I think), Tomasi and Gleason have been weaving a terrific story about family, responsibility and belonging with some note-perfect character work for all three principle cast members. This finale continues that, with a satisfying conclusion to Clark’s fight with the Eradicator that packs a huge emotional punch too. I’m not going to spoil my favourite part, but anyone who knows me could probably guess it after reading. 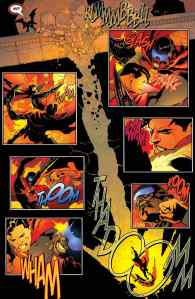 Gleason’s pencils are some of the best in modern superhero comics, packed with detail and expression that manages to retain a classic aesthetic while remaining decidedly current. His superb facial work is only trumped by the gorgeous action, both of which are given ample opportunity to be shown off here. It is clear that Gray and Gleason have been working together for a long time, because the inking is of the same level of quality, bringing a clear boldness to all of the line work, and heavy shadowing that somehow makes the book feel more epic in scale (it is after all, a punching match on the moon). This art team is rounded off with Kalisz’s rich and vibrant palette, a far cry from the grim overtones of much of the DC Universe (or the whole movie universe) with bursting primaries that bring a joyful and adventurous sheen to the story.

Of all the Rebirth books I have checked out, I wasn’t expecting Superman to be my clear favourite. But after 6 issues, I’m hoping that we’re going to be treated to this creative team on the Man and Boy of Steel for a long time. Superman #6 is a gorgeous and shining example of superhero comics, and if you’re not reading it you should definitely pick it up at your LCS or all 6 issues digitally now.