More DC reviews! It feels genuinely great to be picking up a large number of DC Comics again, and hopefully the quality and momentum will continue past all of these first issues in the new post-Rebirth era. Speaking of momentum, this week I picked up The Flash #1 from the same creative as the The Flash: Rebirth issue with Joshua Williamson on writing duties, art from Carmine Di Giandomenico, colours by Ivan Plascencia and letters from Steve Wands (with the cover by Karl Kerschel). The Flash: Rebirth indicated that at least part of the ongoing Rebirth story will be taking place in the pages of The Flash, but typically the character is one of the more unique and interesting in superhero comics, so that is reason enough to check it out! 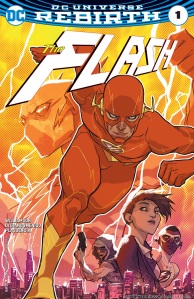 Despite being the fastest man alive, Barry Allen can’t be everywhere at once. He speeds around Central City saving lives, but ends up late to a crime scene for his day job as a forensic scientist. He tries to solve a murder case, but ends up being late to meet Iris West and her nephew Wally. And before that is finished, a series of incidents crop up in the city, so he rushes off and tries to deal with a burning building full of people and a besieged STAR Labs transport at the same time. But is he is fast enough to do both? Probably not, as that wouldn’t be particularly satisfying drama. But who is The Black Hole? And what is happening to Barry’s friend, Detective Heart?

Following on from The Flash: Rebirth, Williamson continues to write a Barry Allen here with a great deal of heart, desperately trying to help as many people as he can despite being stretched to his limits. In fact, he’s even called on this flaw by Iris, albeit from the perspective of him always being late and absent minded. And she doesn’t even know he is The Flash  (I think, I’m struggling to keep the New 52 and pre-New 52 timelines straight in my head, especially now as they start to meld them together). The characterisations and the strong supporting cast are handed deftly by Williamson, leading into what will hopefully be an interesting and dynamic story. The ongoing Rebirth narrative takes a back seat in this first issue, paid lip service to in the opening pages as a concern that Barry and Wally (old Wally West) will both be addressing over time, with the help of Batman (a team up I particularly enjoyed in The Flash: Rebirth). Which works for me, as I think that plot and this book will both be served best by a slow unravelling of the mystery rather than as a focus.

You can’t really have a good Flash book without being able to describe the art as kinetic and dynamic, and unsurprisingly those are two words I can comfortably apply here to Di Giandomenico’s slightly heavy line-work and expressive action and motion. Scenes where we see the comic book hero actually saving lives and fighting crime (shock!) are really excellent here, with Barry somehow managing to battle all the major elements in some form or another in the process. But it’s the scenes where The Flash speeds in and out of a burning building, with multiple shots of him in the same panel running around and saving people, that really stand out in this issue. This is all highlighted by the vibrancy of Plascencia’s colours (especially in the burning building), with even the calmer dialogue-driven scenes boasting a bright palette that is in keeping with the tone of both this book and the character himself.

Heart. Kinetic. Dynamic. Those are things I expect from The Flash and this creative team delivers on all three. Another DC ongoing that I’m happy to be sticking with. Pick this up at your local comic book shop or digital comics platform now!