“If you say so, Lifebringer. Good luck… and don’t stop pushing” – Molecule Man 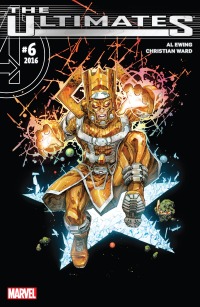 Yes, I’m starting on issue #6 of something this week. This isn’t a series I’ve been reading and I didn’t look up the plot beforehand. Why? Well there wasn’t much new out this week that grabbed my attention I had time I read (coursework and being an adult etc.) But I spotted a passing reference to things being a bit shaken up for Galactus in another comic I read (his cameo in The Unbeatable Squirrel Girl #7) and it seems they’re kicking off a new arc in the The Ultimates (written by Al Ewing, art by Christian Ward) about him. I figured why not?

What’s going on for Galactus these days then? It seems the Ultimates defeated him recently, by reversing his hunger. He is no longer the devourer of worlds; he is the ‘Lifebringer’. A planet seeder who is creating planets and life throughout the universe. There’s a problem though. He’s also learnt of a problem with well, everything. Eternity, the physical manifestation of the multiverse has been bound and chained. He needs to somehow free it.

With the fallout of Doom’s Secret Wars still causing reverberations around the universe, and Galactus’ new role, there are cosmic entities out there who do not care for the new state of play and want to put Galactus back in his place.

Ward’s art is colourful, I’m not so used to the golden Galactus we currently have, but the art was vibrant and made things seem extra dimensional, for lack of a better term. The scenes with cosmic beings and the high level entities stood out.

There’s an on-going metaphor throughout the comic, likening Galactus’ eternal struggle with the legend of Sisyphus, the man cursed to eternally push a boulder up a hill forever and somehow his newfound life-giving powers are part of this. This piques my curiosity. I’m not sure where they’re going with it but it has a lot of potential.

If there’s one criticism I’d give this comic, it’s the lack of Ultimates for a comic called The Ultimates. They’re in there, very much as a cameo appearance though. Otherwise, the dialogue maybe felt a little clunky at times, but these are beings significantly more evolved than I am, maybe that’s the way we’ll all talk when we’ve ascended to gigantic, godlike talking heads?

Otherwise, if you’re curious about Galactus, his history and understanding his role even more in the bigger Marvel picture this is a great comic for you.