Over the next couple of weeks we’re going to be sharing our top 5s of 2015, from everyone who writes here at The Lost Lighthouse. Here is Kit’s Top 5 of Indie Comics of 2015 (Adam picked the featured image for no reason other than it amused him)

My turn to hop on the top 5 bandwagon! My articles in 2015 have mostly been either comics or short stories, to decide what to go back to I figured that actually I’ve read some amazing Indie Comics this year and it would be great to go back and give my favourites some more publicity. Also, it frees up the mainstream comics for Adam if he feels like procrastinating from his thesis some more! (if it had been me by the way it would be: Batman, Unbeatable Squirrel Girl, Saga, Wicked and Divine and Barracuda!)

Reapers, the story of a young woman who dies, only to be recruited by ‘Victor’ aka the Grim Reaper to do his dirty work and collect souls of the dead and battle demons! What does she get in exchange? Sweet oblivion.

I like the art in this comic, a lot of detail is packed into each of the panels and the imagery in the early pages showing the afterlife is unique and captures the mood. The non-human characters appear full of personality and look very cool.

The concept for the story is interesting and a lot could be done with it. Violet’s death and subsequent exploration of the afterlife are really cool and give pivotal insight into her character.

The only thing that didn’t quite work for me in this comic was The Reaper, Victor, much as the Grim Reaper aspect works the way he spoke kinda bugged me, which is why this comic makes my top 5 but not higher.

4 – The Revival – written and drawn by Tom Kyzivat, published by Hound Comics 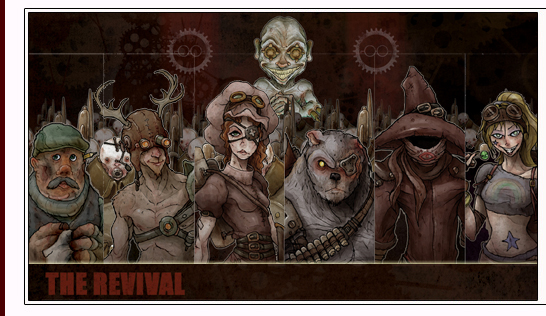 A post-apocalyptic wasteland after a global war and the survivors just scraping to get by? No, this isn’t Mad Max, but sign me up!

The world is ruled by the mysterious figure Patriarch. However, Patriarch has died, and the world has been a worse place for it. Those with magic battle those with technology and our heroes are doing their best to scrape by. And my favourite part? You pick up so much of it naturally, there isn’t the often made mistake of beating you over the head with exposition. Also, one of the characters is a bear.

The art is good, if not the highest quality on this list, however I do love the use of barcodes when the Cabbage Heads speak.

If you like Mad Max, Fallout, Firefly or anything at all like them then this is the perfect comic for you!

From here it’s on to my top 3, where picking the order gets really hard…

Right, Sineater is third. Am I sure about this? Umm… maybe, my top three are all fantastic comics and all very different to each other, I spent way too long trying to work out the order for them and even changed it twice writing this article. To make things a little easier I’ve decided to cheat and award them their own titles for what each of them are best at as well.

Sineater gets Best Concept. This is a really cool idea for a story, a young girl named Cassandra works as a Sineater, and she goes around and literally eats people’s sins. It’s a thankless job and she is hated for her strange powers. The whole idea is communicated brilliantly at the beginning in a conversation between a mother and daughter while Cassandra gets ready to do her job.

The art feels a little like a manga, which isn’t a bad thing and it helps Sineater feel unique.

Speaking of manga, if you like manga or anime like Soul Eater or D-Gray Man this would be a very good comic to pick up as it feels a lot like them in tone.

Some minor dialogue issues put it slightly lower than the next two comics for me, but that was being REALLY picky.

This was perhaps the biggest surprise for me as a comic. It’s not a traditional comic book at all, the story isn’t fantastical, the characters are based on real people and it even has a choose-your-own-adventure element to it.

The story follows a young girl and her attempts to make a career for herself in the gaming industry and the challenges she faces. This really hit home to me as someone who, although in a very different industry, is trying to build a career for himself in our post-recession economy. It isn’t easy at all, and this comic sums it all up perfectly, the long hours, give it your all but only be left feeling unappreciated and completely disposable to businesses.

The art is minimalist and used to illustrate the words more than tell the story itself.

There’s the choose-your-own-adventure bit to it as well, which again hits the nail on the head for what it’s like trying to work these days whatever path you choose.

This really is something I wish employers, and students should read. Students to manage their expectations that things are not as easy as some people will lead you to believe and employers to give them a little perspective for their interns and graduates. I’ve put this as second as it isn’t a traditional comic as such, but it is really worth the read.

1 – Kings of the Wastelands – written, pencilled and inked by Delbert Hewitt Jr 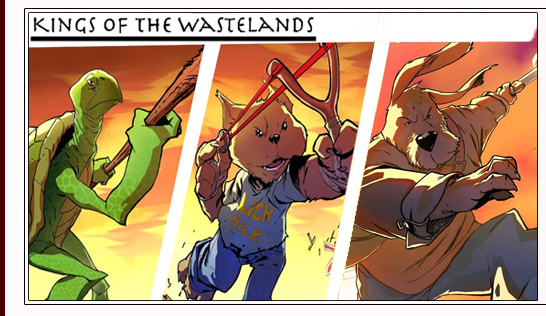 Here we are, my number 1 Indie comic I’ve read in 2015! There’s a lot of good stuff out there, but for me this one just edged it over the competition!

To start with this comic looks fantastic, very professional and the characters are full of colour and life. The characters are all animals and each has so much personality packed into them.

The story itself is very cool as well, it’s (another) post-apocalyptic wasteland, where Jacob is out for revenge against Hunter the Tiger and forms a loose band with Gib the driving Turtle and a Cat with a catapult. The plot itself is fairly simple, but that’s a good thing, it allows for fantastic character inter play, they all bounce off each other to create a fun, vibrant comic. The combat looks great and I love the touch of having the ‘Dragon’ be a Hippo.

This is a fun start to a promising series, if you want an action comic with fantastic fight scenes or if you like Mad Max, but kinda wished they were all talking animals then this is for you. The art is also fantastic and the author and colourists should feel proud of what they’ve made here.

This is why this comics (just) makes it to my number 1 spot.