Our pal Kit hits us up with some more Kick Ass Stories You Should Really Check Out!

“What greater gift than the love of a cat.” Charles Dickens

It has been way too long since I did one of these, lately I’ve unfortunately found my day to day life taken up with moving house, work and good old video games. There hasn’t been much space for listening to stories. However, I did promise cat stories last time to add a little more cheer to my series and dammit I will deliver on that. The cat part at least, not all of these stories are necessarily the happiest. Screw it, next time I’ll just do ‘Weird as hell and not in the good way’.

Anyway, I (like most of the internet) like cats. I have two of them (Mako and Bolin for any of you Korra fans out there) and they bring me a lot of joy. And dead birds. But mainly joy. I’m aware this is a bit off topic for the stories but I wanted to mention them anyway.

Right. Back to the stories. Technically I’ll be covering four of them in this article, however three of these are covered in the same episode of the Drabblecast where they do one of their ‘Trifectas’ – three short stories in one episode and another story which instead covers a tiger of sorts, but big cats still count!

The Cat with Blue Fur 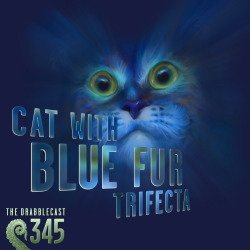 “I let out a low whistle. Genetically modified blue-furred cats were the latest craze. According to rumour, they could talk, use tools, and even do a passable version of the Macarena.”

Going back many an episode of the Drabblecast they announced a competition set by a dad who makes up stories about a cat with blue fur for his kids. These didn’t have to be kids’ stories but he wanted to see what other people could do with the idea. There were three categories – Comedy, Fantasy and Horror, this is what he ended up with:

Meow Meow Bang Bang: Ever wanted to hear a story about talking cat gangster in a 1920s style setting trying to pull fish based shenanigans? Well you do now. This one’s a lot of fun; it’s short, silly and sweet. It’s a story full of the tropes and clichés you’d expect and very much written for kids to enjoy as well. I’d call it the second best of the three in this episode.

Nine-Lived Wonders: This is a story about the relationship between a child and his dad as the child grows up into an adult. The dad makes up stories about the Cat with Blue Fur every night while they’re young and the stories stay with them while they grow up. This is a very nice story, very much done to put the guy commissioning this episode directly into one. It’s my favourite of the three and well worth listening to.

Seven Things That Are Better In Blue: This takes the idea in a different direction. Somebody uploads a picture of a cat with blue fur to facebook which goes viral. Incredibly viral. Soon everyone is obsessed with things being blue which usually aren’t and it begins to affect people’s day to day lives. This story became way too pretentious for me. It’s the only one today, probably since I’ve started writing these short story reviews I actually don’t recommend. I’ll leave it there, unless that quick summary sounds like your kind of thing then stop the episode when you get to this part. Don’t worry; move along, nothing to see here.

The Man Who Drew Cats 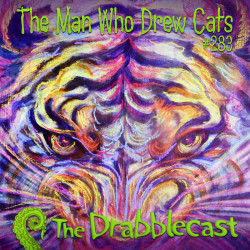 This is a full one story episode. It tells the tale of a stranger who arrives in a village, he’s an artist who draws pictures and sells them on to make a living, and damn is he fantastic at it. His drawings are the most vivid, wonderful things that people have seen and he finds his place amongst the village folk.

But not everyone is quite so nice in the village. Eventually village drama reaches the man’s ears and he does something about it. What he does best. He draws.

I’ll leave the description at that. This is a great story, its stakes aren’t as ridiculously high as they are in many other stories, but the very real issues this story brings up provoke an emotional response which heightens the story’s impact.

This one is well worth a listen to, I seriously recommend it.