Well I thought the Heldrake would be easy. It wasn’t. I still need to dullcoat the bugger but it’s pretty much there. The spawn on the other hand were super easy ad im really happy with the end result. Thank Papa Nurgle for being so accepting.

“Krannon knew his pride, or more arrogance, had got the better of him. The spoils of the first siege had favoured chaos, and their unlikely allies. He did not ask why the ghost warriors had aided them that day, but he was glad of it. He assumed the Tau Cadre were present simply because the Orks were on the Imperial battle line.

With Typhus constantly failing, he knew Abbadon would correct the command chain and put him at the top. He didn’t need help taking the system. But it seemed Typhus did!

With a simple swoop he was able to over power the Space Wolves, though some lesser commanders placed his victory down to luck over skill.

The Warpsmith’s new creation certainly helped that! While theHeldrake was close to uncontrollable, it seemed to have good sense and cause disarray in the marines ranks. But this battle had caused his arrogance to soar. He pushed too greedily and too deep, and the Blood Angel surprise attack took him off guard. He was so enraged he didn’t even leave his rhino! 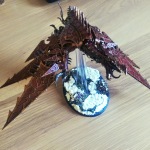