Our pal Kit picked up the new Nintendo 3DS and Zelda Majora’s Mask. Here’s what he thought!

There will be a break from Kick Ass Stories this week. This is entirely because I bought a New 3DS and was busy playing that when I should have been listening to podcasts. I’ll bring back Kick Ass Stories next time with an update of some of my favourites (including the final part of the Mongoose Trilogy!) but for now I’ll just write about my new distraction.

Two weeks ago I popped onto Facebook and saw Nintendo advertising pre-orders for the Majora’s Mask special edition of the New 3DS. As a Zelda/Nintendo fanboy (tattoo and everything) and only having an original 3DS I naturally couldn’t resist as I missed out on their first wave of stock.

£209.99 of money I didn’t really have and the deed was done. A New Majora’s Mask 3DS (digital game included) and Skull Kid statue on their way. This is where my review starts!

I’ll do this in three parts, External Bits (not in that way!) for stuff that isn’t either the Console or the Game.

Service: Nintendo have given me fantastic service over the last couple of years. And they didn’t disappoint this time! This was a pre-order for something they said wouldn’t be in stock till an unconfirmed date in the next month or two. I ordered it Wednesday March 25th. Was told on Friday I’d have it by April 1st (I was sceptical too!) but it turned up on March 30th. I was expecting it Mid-April. So can’t fault Nintendo for service at all. 10/10.

Packaging/Design: Much smaller than I expected, the box for the console has some pretty neat artwork on it, though the Skull Kid statue just came in a blank white box. The charger came separately which I didn’t expect but that’s hardly a point either way. Would have been nice for a better statue box but otherwise all good. 8/10. 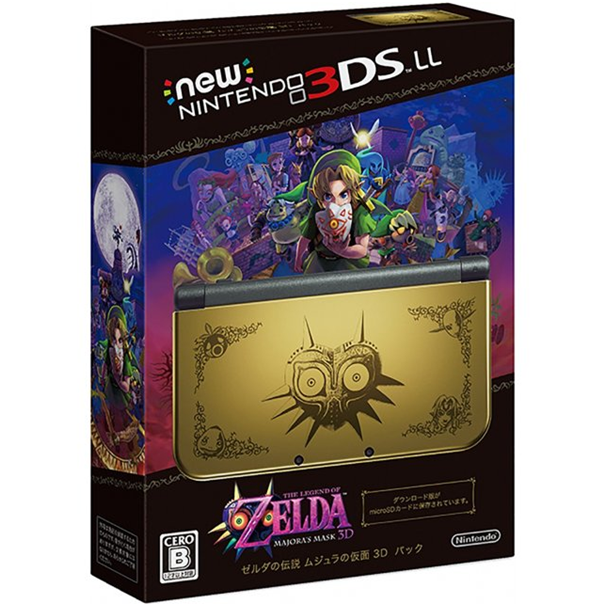 Skull Kid: It’s a detailed model sat on my book case doing a very good job of looking creepy. Would have preferred it if they’d made it an Amiibo and not a statue but we can’t have everything, can we? 9/10.

Design: The console itself looks pretty awesome. I like the artwork, the screen is a vast improvement to what I’m used to, the 3D hurts my eyes less than before but I still only use it for a short while at a time, the two new shoulder buttons are easy to press and generally are very responsive. The new joystick is more of a button than an entire stick as such. It works like those mice you get in the middle of your laptop that no one likes. So far in using it though it’s been perfectly fine. 9/10.

Set Up: Transferring my profile from my old 3DS system took about 20 minutes, considering this was done by wifi and was a few gigs of information this is pretty impressive. It even has a cute Pikmin animation to go with it! I gave my old 3DS to my (much) better half to keep her distracted from her studies too! 10/10.

Other Features: The Amiibo compatibility hasn’t been something can take advantage of yet outside of scanning them and changing their names. It’s certainly a more powerful console I had before, booting up faster and any internet browsing or general functionality rums that bit smoother. I’ll not take the Amiibo into account in my score though as I have no compatible games yet. 9/10.

General Game Play: All of my old games run very smoothly. They boot up quicker than before and can’t fault them at all. I’ve not tried any New 3DS exclusives yet though. 10/10

Graphics: Compared to the N64 version, damn. There has been a huge improvement. It looks great and I’d say the 3D does add something to the game. Playing with it on (when you’ve got it at that point your eyes don’t want to bleed) and both the general game and cut scenes look great. 9.5/10.

Sound: There’s not much I can say on this outside of ‘it’s good!’ The soundtrack is fun and enjoyable, when you put on the masks the screams are creepy, it’s all good. 10/10.

Gameplay: Yes, it is a game I’ve finished before, but fortunately that was over 15 years ago so it’s largely playing as new to me. It’s a favourite Zelda of mine, providing a much darker tone to what you’d usually expect from the series. There is one problem though. Glitches. Around one in ten times I load up the game Link will either fall through the ground into nothingness, the world will flip upside down when I run or I’ll walk through a wall into the background of the graphics. This… isn’t ideal. On this note I’m quite disappointed with Nintendo. They’ve pushed back games before when they’ve either been incomplete or glitchy to finish them properly. I much prefer this than the disappointment when the world starts to fall apart around your character and not in a good way. I found it was a known issue with the game when I looked it up online and there are patches being made. It does run properly once I switch it off and leave it for a while but yeah, try harder next time Nintendo. 7/10. Would have been 10 if it played as it should.

I’m very pleased to have the machine, I’m bound to loose many hours on it and it’s re-sparked my enjoyment of 3DS games. Is it worth getting one? Yes if you don’t have a 3DS or only have an old 3DS. If you have a 3DS XL though… then I’m not so sure if it would be worth it. Most of my enjoyment comes from the increased power and screen size the 3DS XL at least offers an upgrade to the original. If you have one wait to see if the right exclusive New 3DS games come out before rushing to your nearest game shop!