Adam and Kii went to EGX in London on Friday. Here is Adam’s coverage.

On to part two of my EGX round up from last Friday, where Kii and I received our first press passes to check out and cover the gaming expo. After a healthy dose of survival horror (see part one!) we went back down to the main floor to check out a few more games (and to give Kii a break from all the horror!).

There were probably four games I was most looking forward to trying out at EGX. I have already talked about the first two, Alien Isolation and The Evil Within. The Order 1886, the Playstation 4 exclusive from Ready at Dawn and SCEA (due out February 2015), is another and the last I actually made it to. We wandered around for a while trying to figure out where it actually was, before realising it was in the same Playstation demo booth as Bloodborne (the other game I was very keen to try) and Until Dawn. So to try any of these three games you had to join the same queue, taking around 30 or 40 minutes, with an attendant coming through and splitting us up depending on the game we wanted to play. The Order was the most popular, so the queue was the longest, but to play another game in the same booth would mean re-queuing from the back of the line again. As such, I didn’t get the chance to play Bloodborne so we could get to some other game, but The Order was the game I really wanted to check out.

The Order 1886 appears to involve a squad or division of enforcers that hunt and battle supernatural threats in an alternate, steampunk inspired Neo-Victorian London, utilising a variety of advanced weaponry (another character was using a weapons a lot like a Proton pack from Ghostbusters) to fight various creatures and violent criminals. In the demo, you play as Galahad (I’m not sure if you get the chance to play as multiple characters or just this mutton-chopped badass), and The Order join a group of constables who appear to be engaged in suppressing armed rebels or terrorists. Galahad is equipped with a Thermite rifle, which involves firing a combination of a flare at the enemy and spraying them with rapid-fire thermite rounds, which alone do little damage but upon contact with fire cause a huge ignition, setting enemies aflame. Lots of fun.

The demo doesn’t give too much away in terms of story, but hints at supernatural elements, for example a team member is grazed by a bullet and instantly heals the wound by drinking a tincture from a vial around his neck, and it shows off the Neo-Victorian environment. As this is just a snapshot of the game however, nothing is spoiled regarding where The Order are heading or why they are fighting these people. A succinct demo, that showed off the gameplay and the setting for the game, and left me wanting more by the end. 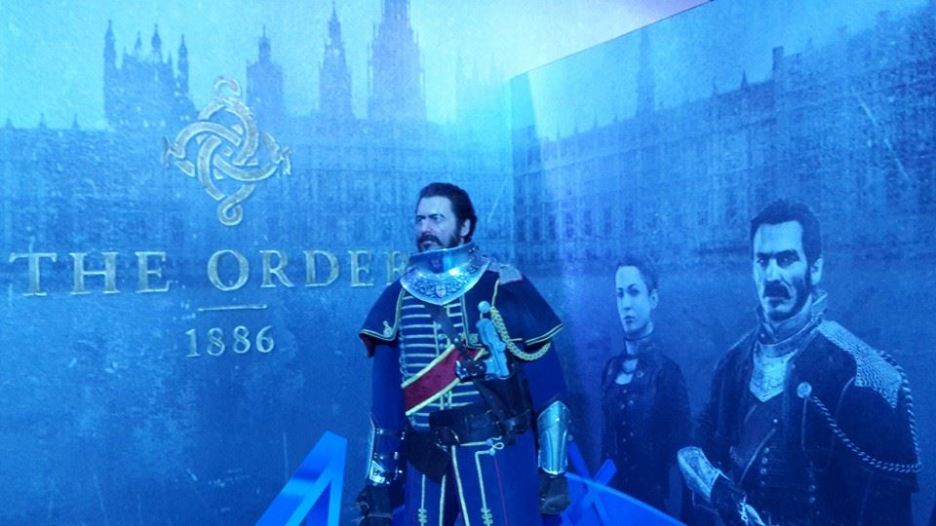 The unique setting of The Order 1886 has me hooked, and I enjoyed the gameplay a lot. There was a fair amount of cover-based shooting, which isn’t a new mechanic but if you are going to use it it is important that it works and fits the game style. This felt like the system perfected by Gears of War, feeling heavy as you duck behind cover and move with all your gear without being sluggish. The only part that worried me was that around halfway through the demo the system froze, and one of the attendants came over and kindly rebooted it for me so I could start again from the beginning. A few minutes later, the same thing happened to the lady playing to my left. Now clearly this isn’t occurring on a level that is worrying the developers if they still felt they could show the demo at the expo (and it is a relatively early demo too), and it didn’t happen to me a second time through. But crashing for two people next to each other isn’t exactly a rare occurrence, unless it really was a total coincidence. However, I’m not worried as I am sure it is something Ready at Dawn are aware of, and with over four months before release I am confident that issues like this will be ironed out. Aside from that minor point, I am still very excited for The Order 1886 and will be keeping an eye on it as it gets closer to release.

This was actually one of the first games we tried out, while we were just wandering around the convention floor when we first arrived. Mortal Kombat X was developed by NetherRealm Studios, and we found it in one of the Playstation booths so played it on PS4, though it is also coming out on Xbox One. I won’t pretend that I play many fighting games anymore, but when I was younger I was pretty in to Mortal Kombat, Soul Calibur and even way further back Killer Instinct on the SNES (I also love Smash Bros.). I never seem to buy new fighters because I only really get a lot of enjoyment playing with people live in the same room, but I always really enjoy them when I get the chance to play any beat em up round a friend’s house. The first trailer for Mortal Kombat X was very pretty and moody, so I was looking forward to the chance to try it out.

Kii and I faced off against each other, she choose Ferra and Torr and I chose Cassie Cage, and we fought on a stage called ‘Kove’ (we get it Mortal Kombat. Everything has to be spelt with a K). The graphics were very nice, which only highlighted the gore to come, and the fighting stage was fun with a few things to throw and other interactions to try out. Kii was a lot better than me, as she plays fighters more often and there was some overlap with the DC Injustice: Gods Among Us game that NetherRealm also developed. However, I still won. Because I am a badass. Or she let me try out my X-ray move which put me at a significant advantage in the last round. Whatever.

This was a whole heap of violent fun, the X-ray mode particularly being hilariously gruesome. As we played this downstairs, we actually were trying the censored version of the demo, with the full version only being upstairs in the 18+ section. Fatalities were blocked on this version, resulting in a victory that lacked any sort of fanfare. However, aside from that I don’t see how this was a censored toned down version. The X-ray mode attacks were all insanely violent and gory. I think Cassie Cage’s involved popping the opponents testicles, which you got to see, and others showed hands being shoved into chests, ripping at internal organs.

Am I going to buy Mortal Kombat X? Probably not. Will I play the hell out of it when I visit Kii and allow her to beat the shit out of me on it? Definitely. If fighters are your thing, this is shaping up to be another great Mortal Kombat game.

Come back tomorrow for the final part of my EGX round up!