I don’t think this needs an introduction. Josh, tell us about swords!

Swords seem to appear in many of my major interests; reading, television, movies, and games. Often taking quite a pivotal role in the epic tale where the hero draws upon the power of a mighty sword to slay a mythical dragon. So I’m going to take this chance to list a few of the most awesome and badass blades. They aren’t all conventional and probably won’t appear in many people’s list. Also about that hero I mentioned, they also probably weren’t wielded by him. Read on to find out more. 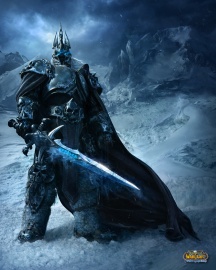 Frostmourne –Video Game – Warcraft 3 and World of Warcraft
“Whomsoever takes up this blade shall wield power eternal. Just as the blade rends flesh, so must power scar the spirit.”

Frostmourne is the cursed blade wielded by the Lich King. It’s power of corruption are beyond measure. Upon taking hold of the forsaken blade you forfeit your soul to the Lich King, in trade for his immense power and command of the undead scourge. Not a bad trade really if you want to go on a bloody crusade slaying thousands. Humans, orcs, elves and even demons fear this blade as many of their kin have been laid to rest, before being reanimated, and commanded by its wielder. Not a bad trade indeed.

This sword is my personal favorite on the list. Its badassary knows no bounds. From the outside the sword doesn’t seem too special, it is a silver hilted bastard sword, with an inky black blade that absorbs light. Now I know you’re saying that’s really not that badass. What makes the sword really cool is that everyone slain by the blade gets trapped in a magical realm. These souls are chained and forced to pull an immense cart pursued by the forces of chaos. But as the souls within the sword fall from lack of strength they add to the weight of the cart making it heavier, meaning Dragnipur’s thirst for souls can never be quenched. What makes it even more awesome is that the guy that carries it can turn into a dragon and took the sword from an elder god before trapping him for eternity to drag the cart.

The Slayer of Kings – Game – Warhammer

The Slayer of Kings is the blade wielded by Archaon, Lord of the End Times. Yes, I know what you are thinking, anyone with a name like that you don’t want to be on the wrong side of. What makes him scarier is his sword, not only does it have a demon imprisoned in it, but a demon driven insane with rage and fury. Got to say that’s a pretty awesome sword. Once the demon imprisoned in the sword is unleashed it’s anger is all consuming meaning that it may even turn on the wielder. Really, to be using a sword of this incredible power you got to be a badass who feels he can hold his own against one pissed off demon.

So that ends my list of 3 awesome swords, I know there are a lot out there that didn’t get a mention, but these are swords that I think are amazing. I would love to hear if any of these swords would make your list or what sword would.

So do you have a favorite fictional blade?