The dreaded top 3 list! They are difficult for anyone to write, particularly when the subject is something they are passionate about. I was toying for ages with this one. 2-player games are something of a precise art form. It needs to be engaging enough to keep both players hooked. With more than 2 players you tend to get the banter between the other participants while one person decides what they are going to do. With 2-player games you don’t get that grace. So with a lot of thought, here are my top 3 in reverse order: 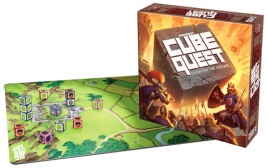 This is a perfect little game that doesn’t take itself too seriously. In a nutshell, two waring armies made up of cubes are secretly set up on opposite sides of these nifty mouse mat battlefields. Then the generals – you and a friend – take it in turns to flick the warriors (cubes) at each other to try and knock the other player’s king off the table. How are the glorious kings represented you ask? Well…they are just other cubes…with a crown sticker on.

Is it a board game or a miniatures game? Well it says miniatures game in the title but it’s made by one of the biggest board game publishers around, Fantasy Flight Games (FFG). Ether way I don’t care, it’s awesome! Do you want to be looking up one of a hundred possible manoeuvres then cross referencing it with your opponent’s? No, of course not. You want be snapping necks and cashing cheques! X-Wing uses an innovative manoeuvre dial system so your opponent’s move is a secret to you and your’s are to him. They’re then revealed in order of who has the best piloting skill. I highly recommend picking up the core set. It is futile to resist.

Yes yes I know it’s a card game but I still think it counts. Netrunner has exceeded all expectations I had. Also published by FFG, it will have you pulling your best poker face all game. It’s an LCG (living card game) not a CCG (collectible card game) like Magic: The Gathering. Which means you won’t be spending lots of money trying to find that illusive rare. You can just find the card you want from the expansion it’s in.

I very much consider this game a combo of risk management and high-powered bluffing. If you read easier than a Beatrix Potter book then it’s time to get practicing, as you’ll have nowhere to hide. One player represents the “runner”, a cyberpunk hacker who wants to show the corporation as the dirty, lying, stealing thugs they are, while taking a few credits for themselves along the way. The other player represents the aforementioned dirty, lying, stealing “corporation”, trying to secretly score “agenda” points.

This, to me, is the best card game on the market and I can’t get enough of it. You can pick up the core set for around £30. Well worth it in my opinion. I have two! I wanted three of each card – I know, I know, WHAT A NERD!

Well that’s my top three 2-player board games, though none of them really uses a board. Oh well they are all awesome anyhow. X-Wing and the Netrunner core game can both be picked up from Element Games.

What are your top three 2-player games?